ON THE COVER GEORGE CLOONEY

Winner of a Lifetime!

“Look, if the cameras are going to follow me where I go, then I’m going to go where the cameras should be.”–George Clooney

When we think of anniversaries in Hollywood, one name instantly comes to mind: George Clooney! Clooney’s high-profile marriage to Lebanese-British human rights lawyer Amal Alamuddin which took place on September 27th, 2014 in Venice, Italy has already produced twins (Alex and Ella) plus a host of other interesting developments.

The Clooneys received a coveted invite to the Royal Wedding between Prince Harry and American actress Meghan Markle that just took place on May 19th, 2018 as nearly two billion viewers around the world will recall. For many, meeting George Clooney was the high point of the elaborate ceremony at St. George’s Chapel with all its photo ops and after parties.

No sooner did George Clooney touch back down on American soil than he received another tribute: the 2018 American Film Institute’s Life Achievement Award. Established in 1973, the AFI Life Achievement Award recognizes an individual whose career in motion pictures or television has greatly contributed to the enrichment of American culture. It is considered the highest possible honor for a career in film.

Clooney’s AFI award was presented at the Dolby Theatre in Hollywood on June 7th, 2018 by longtime friend and colleague Julia Roberts via satellite. Former US President Barack Obama, who is also 57 years of age, spoke in praise of Clooney’s many accomplishments both on and off screen in pre-recorded remarks screened at the gala.

“I cannot deny what we all know — that he [Clooney] is a good man, a good friend, a good citizen, an outstanding maker of film,” concluded Obama. “For all the lifetimes you have portrayed and all the lives that your work has helped to save, congratulations on this lifetime achievement award, my friend. It is well deserved.”

2017 AFI award recipient Diane Keaton was followed on stage by television host Jimmy Kimmel and actors Laura Dern, Jennifer Aniston, Courteney Cox, Bill Murray, Miley Cyrus, Richard Kind, Anna Kendrick, Cate Blanchett, and Shirley MacLaine. Clooney’s wife and parents were on hand to give heartfelt speeches about this much-loved man. “At age 84 I would like to grow up to be like my son,” said his father, Nick Clooney.

While George Clooney still looks and seems young for lifetime honors, his body of work has already spanned more than three decades. He is the only person ever to have been nominated for Oscars in six different categories (Best Picture, Best Director, Best Actor, Best Supporting Actor, Best Screenplay, and Best Adapted Screenplay). He won Oscars for playing a supporting role in SYRIANA (2005) and for producing the political thriller ARGO (2013).

Since 2008 George Clooney has served as one of the United Nations Messengers for Peace and has created documentaries such as SAND AND SORROW to raise awareness of international crises. Like fellow A-list actor Angelina Jolie, he is a member of the Council on Foreign Relations (CFR). Most recently Clooney supported the Presidential campaigns of Democratic candidates Barack Obama and Hillary Clinton with LA-based celebrity fundraisers.

Clooney’s gratitude for the AFI award seemed more than sincere. “When I was a young, broke unemployed actor, not only did I not have a job, I didn’t have an agent, I couldn’t get auditions,” he said. “I was lucky enough to be able to do a few short films for some up-and-coming young directors at the AFI.”

His long-running role as Dr. Doug Ross on the medical television drama ER (1994-2009) cemented George Clooney’s everlasting image as a heartthrob with a good head and a real desire to heal. A shared passion for social justice drew him to wife Amal and their life of global activism.

So perhaps this merry Hollywood prankster, like Prince Harry, has finally settled down and become a mature and compassionate member of the world community. What might be next for George Clooney?

“Please mix your comedy, your humanity, your serious desire to help us understand who we are,” said Shirley MacLaine. “Please direct more.” That sounds like a plan! 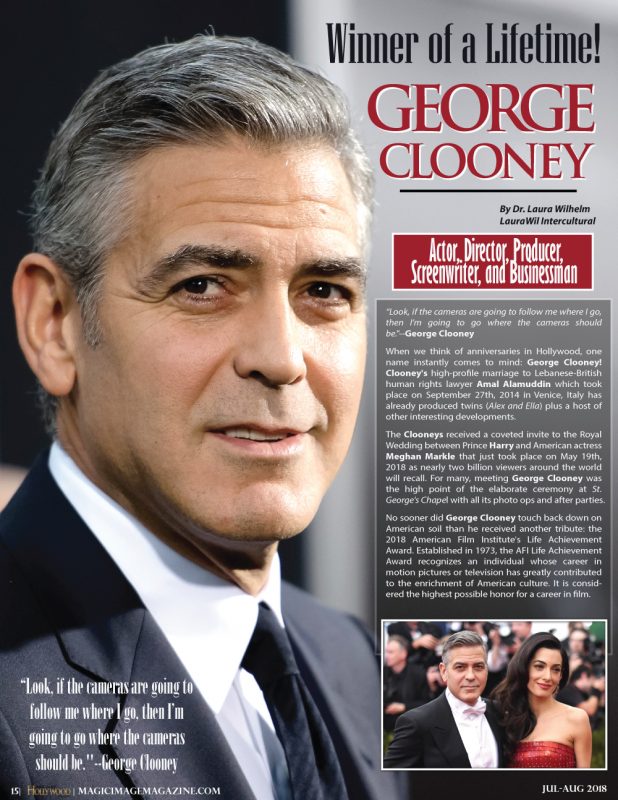 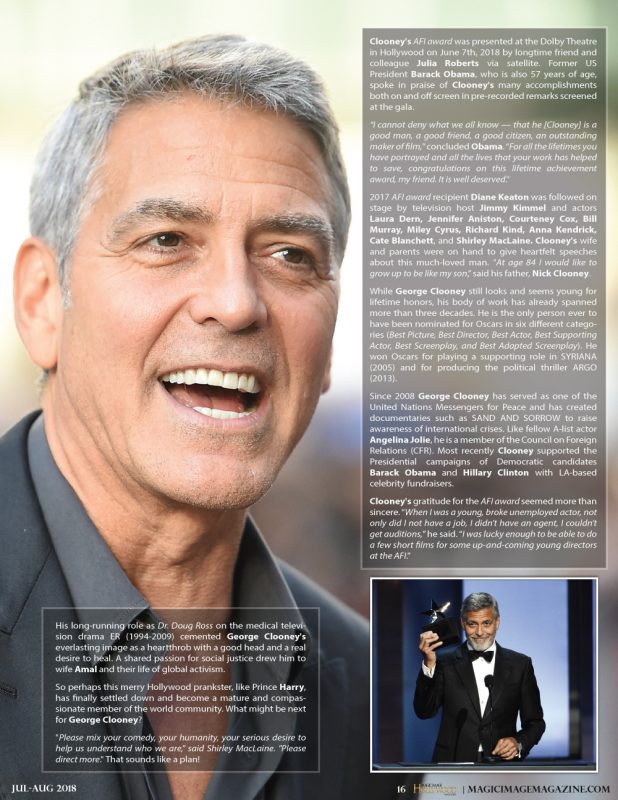 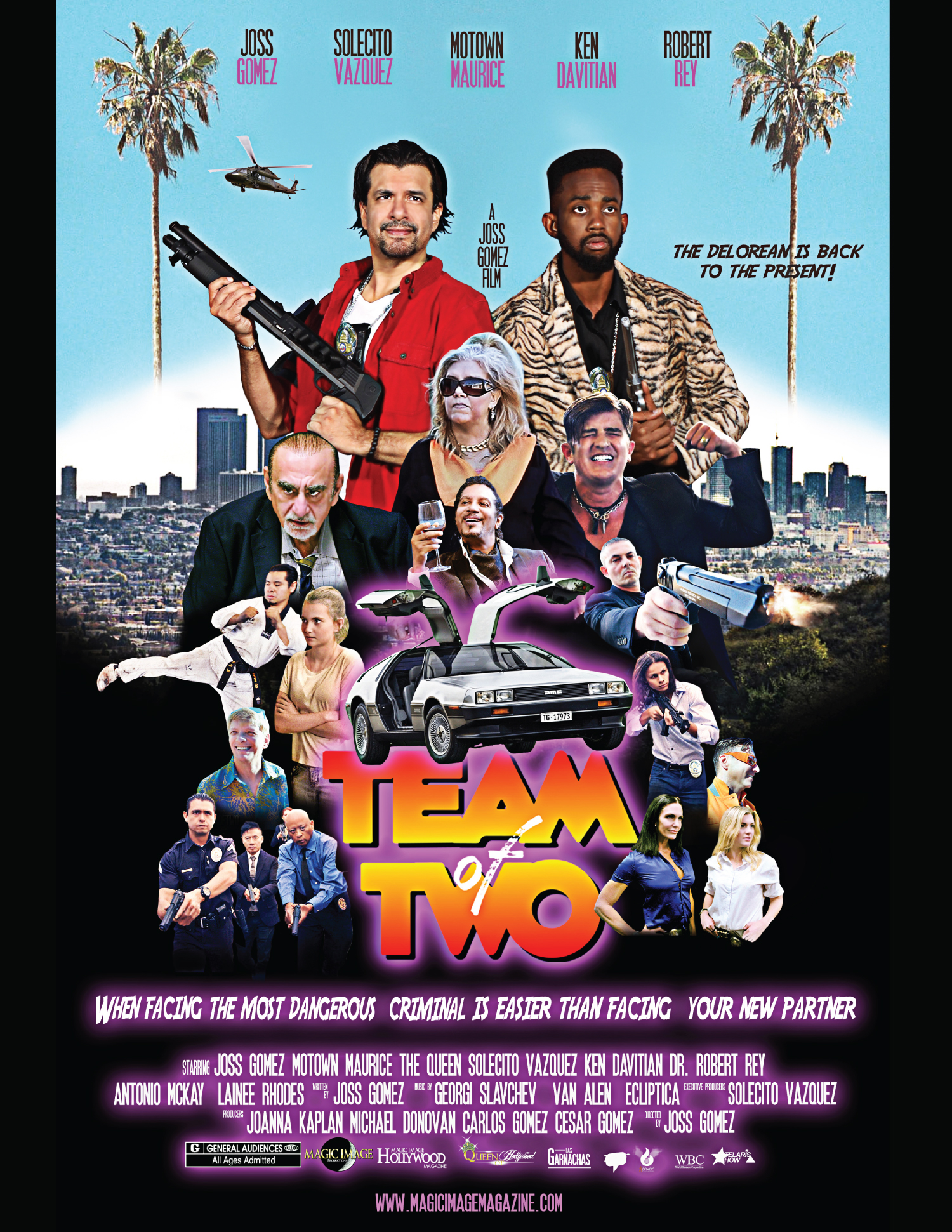